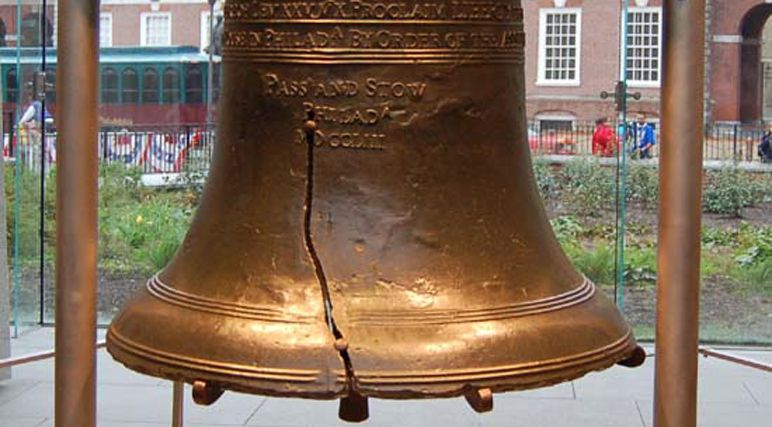 What Connects These Three American Icons? They may well all be symbols of American heritage, bravery and excellence but that’s not the answer we’re looking for.

We’ll reveal ours at the end.

Let’s start with the Liberty Bell, perhaps the enduring image of American independence. The original bell was brought to Philadelphia by William Penn, founder of Pennsylvania.

As the city rapidly expanded a louder bell was required and an order was placed with the Whitechapel Bell Foundry in London, an institution that has been casting bells since the reign of Elizabeth I.

The bell was duly cast in London and then sent by sea on its long journey to the Province of Pennsylvania. Whether it was damaged in transit we will never know, but the bell cracked on the first strike of its clapper.

This precipitated a long running dispute over who was to blame.

Two local bell founders performed a re-cast of the offending bell with rather mixed results.

This later gave rise to a rather witty quip from President Benjamin Harrison;

“This old bell was made in England, but it had to be re-cast in America before it was attuned to proclaim the right of self-government and the equal rights of men.”

The bell was smuggled out of Philadelphia during the American Revolutionary War to escape the clutches of the invading Redcoats.

After the war, restored to its rightful home, the bell developed a new crack but no-one seemed to mind. By now it had acquired symbolic status.

During the Bicentenary celebrations in 1976 some good natured protestors marched outside the Whitechapel Bell Foundry with placards saying “WHAT ABOUT THE WARRANTY?”

They needn’t have worried though, the Queen herself was present as a brand new 12,446lb Bicentennial Bell was supplied by the Whitechapel Bell Foundry complete with the inscription: Many people will know that Mount Vernon Estate, Virginia was the plantation home of George Washington, first President of the USA.

It is owned and maintained by the Mount Vernon Ladies Association and was designated a National Historic Landmark in 1960.

Amazingly, the estate even served as neutral ground during the American Civil War. What may be less well known though is where the name came from.

He named it after a commanding officer in the British Navy he had served under; Vice Admiral Edward Vernon. Vernon was born in Westminster, attended Westminster School and has a rather imposing monument near the North Door at Westminster Abbey.

Although reasonably successful he was by no means a famous naval hero in the manner of say Lord Nelson.

He did however capture the Spanish colonial possession (now in Panama) of Porto Bello in 1739 using just six ships! Some people may be familiar with the celebrated and eclectic Portobello Road street market in Notting Hill.

This takes its name from the same battle.

There is even an Admiral Vernon Antiques Arcade on Portobello Road as a nod to the Admiral himself. John Harvard was born in Southwark in 1607 and baptised at St Saviours Church, today known as Southwark Cathedral. The Harvard family lived locally but his mother’s side of the family (nee Rogers) came from Stratford-upon-Avon and were associates of William Shakespeare’s father.

After returning from studying at Cambridge University, perhaps John might have stayed in London had fate not intervened?

John lost most of his immediate family members, including father and brother, in the Southwark Plague and decided to emigrate.

John and his wife Ann left for Massachusetts in 1637 to start a new life.

Sadly, things didn’t turn out well and Harvard died of consumption in September 1638.

The childless Harvard, who had inherited considerable wealth from his family, bequeathed half his wealth (then £ 779, today about £ 100,000) and his 400 volume library to the “New College” being formed by the Massachusetts Bay Colony. The college was based on the English University system but run with Puritan values and indeed trained many Puritan ministers.

In 1639 the college was renamed Harvard College and today Harvard University is one of the most prestigious in the world. The Endowment Fund at Harvard University had mushroomed to approx US$ 32 Billion by the end of 2011 so John Harvard’s legacy seems quite well assured.

Back at Southwark Cathedral, where Harvard was baptised, there is a beautiful John Harvard Chapel in the North transept, paid for by Harvard alumni resident in England. – Liberty Bell was cast at the Whitechapel Bell Foundry in London
– Mount Vernon was named after a Londoner; Vice Admiral Edward Vernon
– John Harvard, benefactor of Harvard University, was a Londoner