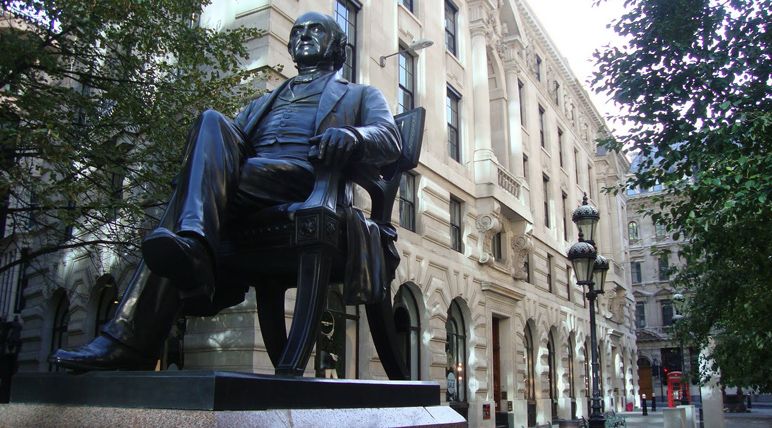 From the Affluent to the Effluent

Who would you consider to be Victorian Greats; Charles Darwin, Florence Nightingale, George Stephenson? All were remarkable people and rightfully celebrated. Indeed all have even adorned British banknotes at one time or another.

We commemorate though three underappreciated people who devoted their lives to combating London’s considerable problems, who laid the foundations for modern living and society. These are our Forgotten Victorian Heroes.

George Peabody was born in 1795 in what is now called Peabody, Massachusetts. He had a successful career as a merchant in Baltimore but by 1837 had set up a banking firm “George Peabody and Company” and settled in London.

His business was very successful; indeed he took on the father of JP Morgan, as a partner. The banking giants JP Morgan Chase and Morgan Stanley can both trace their roots back to this partnership. It is what Peabody did with his money though that makes him so noteworthy. In 1862, Peabody made an initial gift of £ 150,000, about £ 12 million in today’s money, to set up the Peabody Donation Fund. The aim was to improve the living conditions of the poor at a time when there was no safety net from the State. By 1864, the first social housing estate had opened at Spitalfields, an overcrowded and poverty-stricken part of East London that would later become notorious during the Jack the Ripper murders.

The first estate incorporated unheard of features such as separate laundry rooms, open courtyards, rubbish collection and areas for children to play in. Today, the Peabody Trust provides affordable and quality housing for more than 55,000 people all over London, at a time when rents account for more than half of earnings in many London boroughs. This year marks the 200th anniversary of the birth of Angela Burdett-Coutts.

If Peabody was the acknowledged father of modern philanthropy, then Burdett-Coutts was the mother.

She inherited over £200 million in today’s money from her grandfather Thomas Coutts, the founder of Coutts Bank.

Forbidden by social convention to get actively involved in the bank, she instead focused her efforts on philanthropy.

What was truly remarkable was the breadth of ground breaking good causes she helped: There was an element of intrigue about Burdett-Coutts as she eventually married, at the age of 67, her 29 year old male American secretary. This caused an inheritance furore perhaps not equalled until we had the never ending saga of Lady Mary and Matthew Crawley’s financial affairs in Downton Abbey. Our focus though is on the immense good that both Burdett-Coutts and Peabody did. They are shining examples of people who used their extreme wealth for the betterment of society.

In a beautiful example of serendipity, Burdett-Coutts was buried in the West End of the Nave at Westminster Abbey, the very same section that George Peabody, the only American ever buried at the Abbey, had temporarily been interred at.

Despite the admirable efforts of Burdett-Coutts, Peabody and many others the sheer scale of expansion in Victorian London created massive overcrowding and consequently huge slums.

Disease epidemics in the cramped, unsanitary conditions were all too common with influenza, typhus, typhoid fever and cholera all major contributors. In 1856 Joseph Bazalgette, a competent if hitherto undistinguished civil engineer was appointed Chief Engineer to the Metropolitan Board of Works.

One of their most urgent tasks was to tackle London’s sewage problem.

Up until then sewers had discharged directly into the Thames, from which water companies were still extracting drinking water. These new main sewers emptied much further downstream thereby allowing the effluent to escape out to sea.

This provided land to house the enormous main sewers but also had a scouring effect as the water flowed much quicker in the narrower channel. Some of Bazalgette’s decisions were crucial; he doubled the diameter of pipes used compared to even the highest of forecasts, saying “well, we’re only going to do this once and there’s always the unforeseen.” With the advent of the flushing toilet and also large tower block living driving the volume of waste up exponentially, the sewers could not have coped without this foresight.

The new sewers were a huge success, rapidly eradicating cholera and leading to a dramatic improvement in the water quality of the River Thames.

Indeed today, the River Thames is recognised as the cleanest river in the world that flows through a major city.

Wildlife has returned in abundance to the Thames with more than 120 species of fish being recorded and even dolphins making rare appearances.

Peabody, Burdett-Coutts and Bazalgette all made a dramatic difference to the lives of 19th century Londoners.

The philanthropic institutions Peabody and Burdett-Coutts pioneered are still going strong while Bazelgette’s feat of engineering, initially designed for 3 million, is still benefitting the now 8 million residents of London.

Have they received the recognition they deserve? We would argue not. It is perhaps not appropriate to have extravagant memorials for such self-effacing characters but as a small snapshot of their combined legacy we highlight the drinking fountain in Victoria Park. Victoria Park is actually London’s oldest public park, built in the mid 19th century to provide some greenery and breathing space both for the overcrowded masses of industrial East London as well as residents of the new emerging suburbs. Set within the landscaped grounds is the striking Gothic styled drinking fountain. It was funded by Burdett-Coutts, but designed by the Victorian Architect H. A. Darbyshire, himself the lead architect for the Peabody Trust for over 20 years. We couldn’t find a direct link to Bazalgette there but symbolically, providing clean drinking water for Londoners seems rather apt.

Article on Cholera and the Thames

The Great Stink of London by Stephen Halliday

The Living Thames by John Doxat